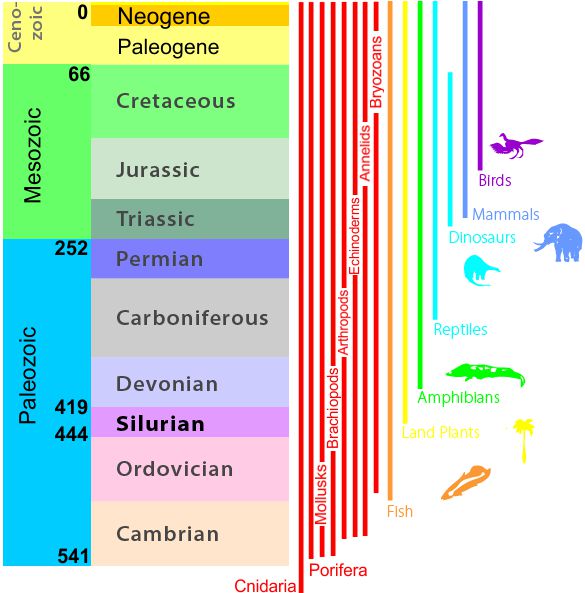 A chart of geologic time from the Paleozoic Era (541 million years ago) to present. Colors are based on the standard color codes used by geologists today. Keep an eye out for the Silurian Period 444-418 million years ago...

The relative geologic time scale recognizes intervals of ancient time based on an older to younger sequence of fossil assemblages. Major divisions of this time scale are called eras. The Paleozoic Era, a term that means "old animal life," is characterized by extinct animal groups such as trilobites. The Mesozoic Era, which means "middle animal life," is characterized by a different assemblage of fossils, including ammonites and dinosaurs. The Cenozoic Era, which means "modern animal life," is dominated by fossils of animal groups that still survive, such as mammals.

The geologic eras are subdivided into smaller time units called periods. The periods are also based upon changes from older to younger types of fossil assemblages. In the Paleozoic, for example, using the principle of faunal succession the Cambrian, Ordovician, and Silurian periods can be distinguished by different forms of trilobites. In the Mesozoic, different forms of dinosaurs distinguish the Triassic, Jurassic and Cretaceous periods.

Numbers for millions of years before present are derived from the absolute geologic time scale, which is based on radioactive decay rates of naturally-occurring isotopes of certain elements, this is called radiometric age dating. These isotopes for the most part occur in igneous rocks that do not contain fossils. Calibration of the two time scales is an ongoing and rather involved procedure in geology, and absolute ages assigned to the eras and periods continue to be revised as more isotopic data accumulates.