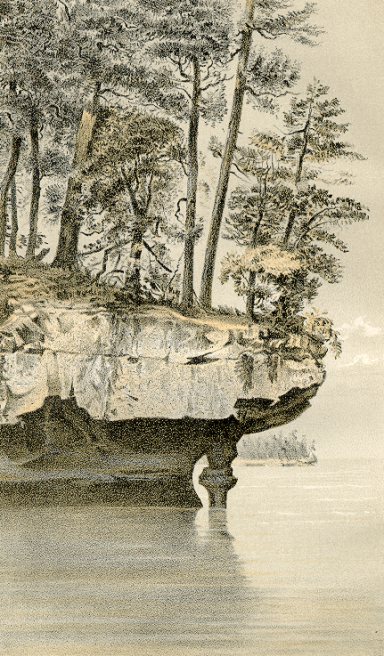 In Wisconsin there are five main episodes of rock formation during the Proterozoic:

Rifting and Animikie Basin - 1.6-2.5 billion years ago - Early Proterozoic
Evidence of rifting can be seen in an east-west trending zone across northern Minnesota, northern Wisconsin, the Upper Peninsula of Michigan, and southern Ontario. In this rifting zone, the continent began to spread apart and gradually subside. Seawater invaded the rift zone, the Animikean Basin, and deposited sediments. Basal sandstone made up of material eroded from the Archean granite and gneiss was deposited in the subsiding rift zone. This sandstone is up to 700 feet thick in the Gogebic Range and has been metamorphosed into quartzite.

Overlying this quartzite is a layer of carbonate rock that has been metamorphosed into marble. This carbonate rock was precipitated out of seawater by cyanobacteria which formed large microbial mats. These mats were sticky and easily covered with mud and other sediments. After being covered with mud, the bacteria would grow up, through the layer, and form another microbial mat on top of the mud. In this way, layers upon layers were deposited. These layered structures, which are often dome-shaped, are called stromatolites and are the oldest fossils in Wisconsin.

Banded iron formations are also present and formed in a similar way as stromatolites. Instead of precipitating carbonate minerals, the bacteria precipitated iron directly out of the seawater. These iron layers alternate with quartz layers, with quartz often occurring as red jasper. The formation of these banded iron formation could only have occurred in very low levels of oxygen. Banded iron formations are an important source of iron worldwide. Early iron mining in the Lake Superior region concentrated on enriched iron deposits where the silica (quartz) had been leached out and large crystalline bodies of hematite, illmenite, psilomene, and other iron rich ores formed. As these were mined out, low grade ore from unaltered iron formations called taconite was mined and processed. Other sedimentary and volcanic rocks were deposited in the Animikean Basin including sandstone, shale, greywacke, and basalt. These rocks were also metamorphosed under high temperature and pressure to form quartzite, slate, schist, and greenstone.

Penokean Mountain building event - 1.75-1.9 billion years ago - Early Proterozoic
Collisions between a volcanic island arc (similar to Japan) and two Archean terranes deformed both the terranes and the sedimentary rocks in the Animikie Basin. When these collisions occurred, large mountains formed and the rocks were deformed by high temperatures and pressures and were subject to thrusting, folding, and faulting. The mountains have long since been eroded flat, but evidence of this collision still exists in the rocks of the Lake Superior region, including parts of Wisconsin, Michigan, Minnesota and Ontario.

Secondary mineral deposits of zinc (sphalerite), copper (chalcopyrite), gold, silver, and other minerals formed in association with the rhyolite centers of the volcanoes of the old island arc and intruded granite. Dissolved in hot liquid, these minerals were deposited by geothermal hot springs and circulating pore water. The hot liquid deposited these minerals preferentially in the highly altered volcanic ash and breccias of the volcanic island arcs because of the high solubility and permeability of this rock. The mine at Ladysmith, Wisconsin is an example of this type of ore deposit.

The unaltered granite and rhyolite of this time is quarried as decorative stone and used in monuments all around Wisconsin and the United States. Everyone knows that General U. S. Grant and his wife are buried in Grant’s Tomb, but did you know that the coffins they are buried in are made from Montello Granite, quarried in Marquette County, Wisconsin? Also, Wisconsin’s state rock is red granite.

Baraboo Interval - 1.7-1.6 billion years ago- Early Proterozoic
After the Penokean mountain building events, a quiet time of erosion occurred. The granitic mountains formed during the Penokean were eroded and weathered, producing great quantities of sediments. Thirty-five hundred to four thousand feet of pure quartz sand was deposited across Wisconsin and the upper Midwest by braided rivers and shallow marine environments during this time. After deposition of this sandstone, another mountain building event occurred. The sandstone was heated to 300-350º C at a pressure of 1 kilobar, which fuses the quartz grains together to form quartzite. The quartzite was deformed, altered, tilted, and folded into mountains. Rhyolite also intruded in several areas. The cause of this mountain building event is poorly understood, but it is hypothesized that another terrane further to the south collided with the three terranes that form the basement rock of Wisconsin. No evidence of this terrane has been identified because of the thick Paleozoic sediments that cover southern Wisconsin and Illinois.

Wolf River Batholith - 1.4-1.5 billion years ago- Middle Proterozoic
The Wolf River Batholith includes granite, syenite, and anorthosite that intruded into older basement rock 1.5 billion years ago. Batholiths formed from a series of hot magma bodies that started to rise from deep in the Earth. These bodies rode into the crust and slowly cooled below other rocks of the crust. The rocks above these magma bodies must be eroded away before the batholith is exposed at the surface. Batholiths are characterized by their large size and the often complex series of rocks in them. Each magma body can be of a slightly different composition resulting in many different rock types being formed. One of the key features of this batholith is the Rapakivi, Finnish for "crumbly rock", granite. This granite has large 3cm pink potassium feldspar grains with white plagioclase overgrowths (rims).

Keweenawan rocks - 1.1 billion years ago- Middle Proterozoic
The Keweenawan Rifting event produced volcanic rocks from Lake Superior to Kansas and sandstone. Gas bubbles (vesicules) in the basalt later filled with secondary minerals, such as quartz, deposited by hot pore fluids. Often they were deposited in layers, with each layer colored by trace amounts of iron and other minerals. The quartz was more resistant to weathering than the basalt, so often the basalt rock it formed in was completely destroyed, leaving behind the quartz fillings. These quartz fillings are called Lake Superior agates and can be collected along the shores of Lake Superior. Another important secondary mineral that was deposited in these basalt and sedimentary rocks is copper. Large deposits of native copper have been mined from these rocks, especially in the Keweenaw Peninsula of Michigan. 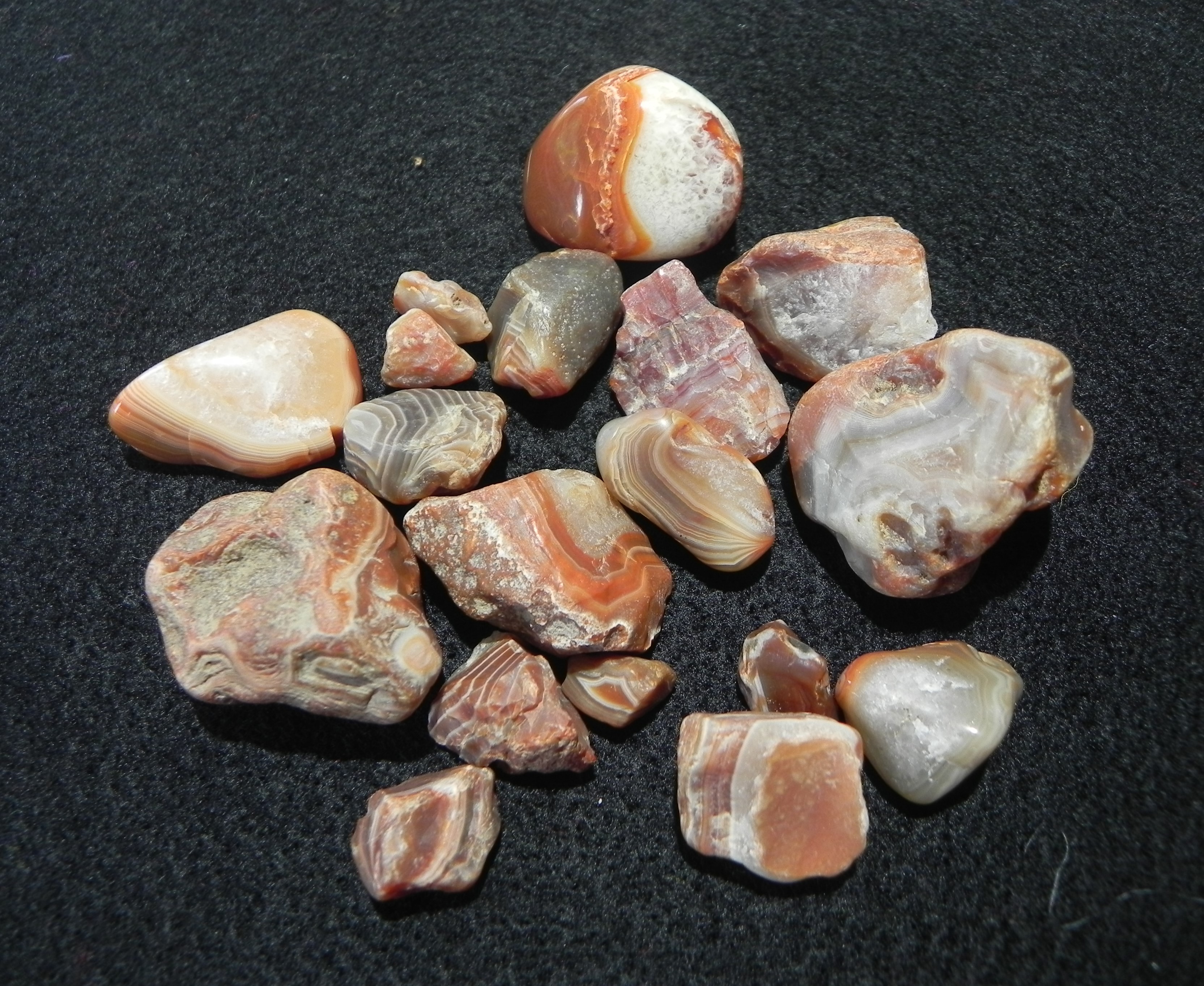